CLUE is a tool and protocol for designing and cloning multiple custom sgRNA libraries for CRISPR/Cas9 screens in a fast and parallel way. To do so, CLUE combines a user-defined number of sgRNA libraries in a single oligo pool, which can be ordered through an oligo synthesis provider of choice (oligo length <150 nt). Using pre-defined DNA adapters allows for amplification of the entire oligo pool (PCR1) and specific amplification of any sgRNA library (PCR2). sgRNAs are further flanked by sequences derived from RNA polymerase III promoter H1 or U6 and the sgRNA scaffold (vector homology sequences), which are used as primer binding sites to generate sgRNA fragments ready for Gibson cloning (PCR3, Figure 1). 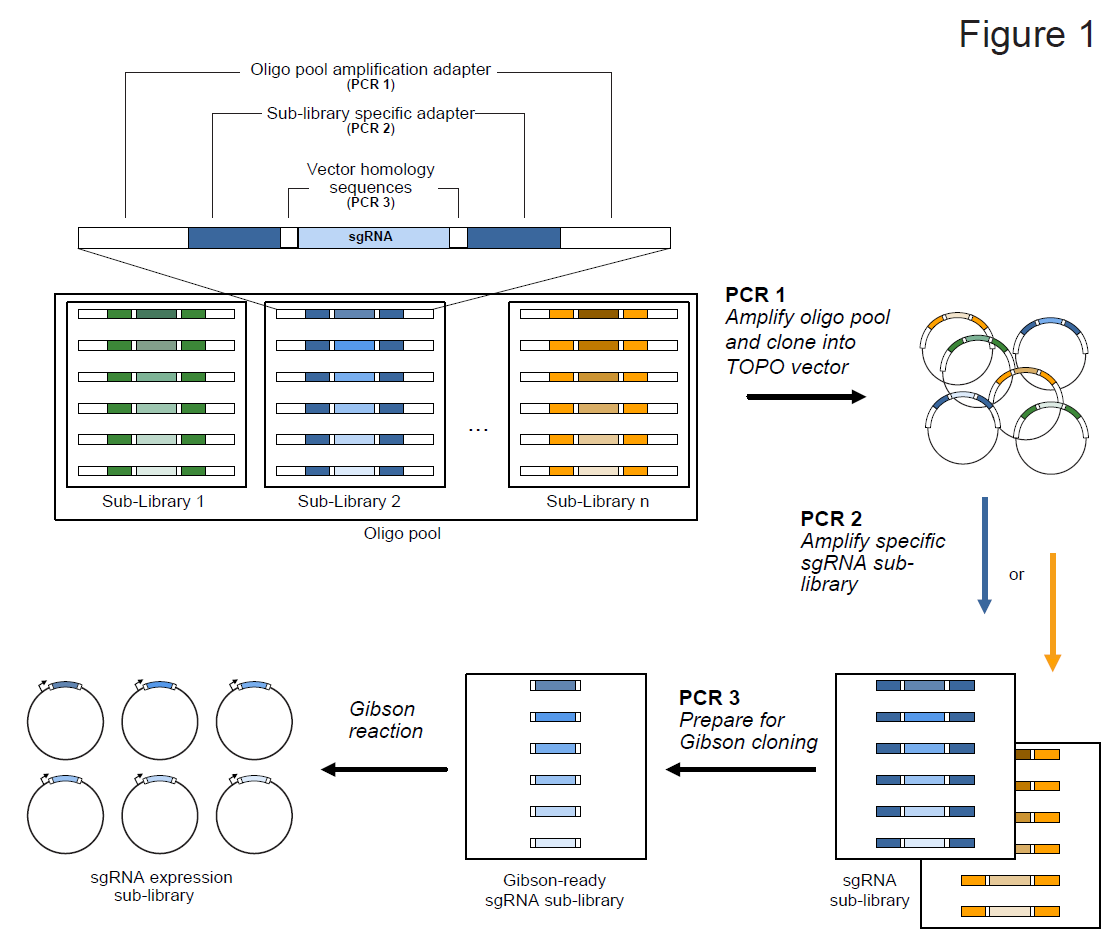 The CLUE web tool accepts a .CSV file, which contains all information about all sgRNA libraries to be included in the oligo pool. This file has to be generated and provided by the user in the correct format (described below). The output generated by the tool comprises one Excel file with several sheets containing:

In a first step, the user has to define the number of sgRNA libraries. Libraries can be designed for any type (CRISPRko, CRISPRi, CRISPRa) of CRISPR/Cas9 screen. The .CSV file can have one of two formats. The user has to decide whether he wants to provide gene names or sgRNA sequences for the libraries (mixing both input styles for one oligo pool is currently not supported). If the user decides to provide gene names, these gene names will be matched to sgRNAs from publicly available sgRNA libraries from the Sabatini, Doench and Weissmann labs. In the gene format the user will also have to provide information on library name, species (currently “human” or “murine” are supported) and type of sgRNA library (“ko”, “kd” or “act” for CRISPRko, CRISPRi and CRISPRa, respectively). In the gene format, each column of the file must have the following order (from top to bottom): Library name, species, type, gene symbols. When deciding to provide the .CSV file in gene format, the user will also be asked to specify how many sgRNAs per gene should be included in the library (range between 1 and 10). This option will be chosen from a drop-down menu. If the user decides to provide sgRNA sequences himself (thereby directly determining species and type of library), the format for the input file is different. In the sequence format, each library occupies two neighboring columns where the first column holds the sgRNA IDs and the second column holds the sgRNA sequences. Additionally, the first cell of the first column should contain the string “sgRNA ID”, whereas the first cell of the second column should contain the name of the respective library. Of note, due to the requirement for RNA Pol III, every sgRNA sequence that does not start with a G will be prepended with a G automatically. Figure 2 gives one example each, for the two input formats.